7 Food Additives That Cause a Leaky Gut 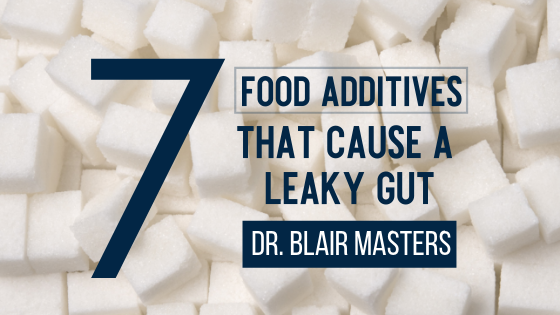 There is No Doubt!!

The research is clear. And we see it in the office every day. The Standard American Diet causes the most prevalent diseases that people experience in their daily lives and ultimately die from.

Today I want to talk about food additives. A recent article from June 2015 in the journal Autoimmunity Reviews looked at how food additives lead to intestinal permeability (or leaky gut )and this leads to Autoimmune Diseases.

Autoimmune diseases are among the fastest growing diseases in our country and others. They have shown a steady rate of increase over the past 3 decades, especially in Western cultures, and it’s now estimated that 25-50 million Americans suffer, making it more prevalent than cancer or heart disease. billion.

Multiple sclerosis, Type 1 diabetes, inflammatory bowel diseases (mainly Crohn's disease), systemic lupus erythematosus, primary biliary cirrhosis, autoimmune thyroiditis, hepatitis and rheumatic diseases (rheumatoid arthritis), and celiac disease are several examples. Over 100 different diagnoses have been considered autoimmune in their mechanism.1 And this does not include everything. This is just a list of some of the more serious ones.

The standard medical approach to this problem of autoimmunity is to use various drugs to shut down your immune system. This may help to relieve the immediate symptoms, however, this is a very bad idea in the long run. Many of these medications have been shown to increase your risk of serious infections and cancers and various other health problems that your immune is supposed to prevent.

The job of the gut is to let the good stuff in (vitamins, nutrients) and keep the bad stuff out.

Your gut is lined by a layer of cells called the gut epithelium. It’s this thin layer of cells that lets the good stuff pass through and keeps the bad stuff out! When this layer becomes damaged, bad stuff gets into the bloodstream and the immune system will then recognize this and mount an immune attack. I always use the analogy of a screened-in porch. The job of a screen is to let the good stuff in (fresh air and cool breeze) while keeping the bad stuff out (mosquitos, bugs). A screen is a very simple yet very effective layer of protection against these things, just like your gut lining. But what happens if somebody is poking holes in your screen? The good stuff still gets in, but so does the bad stuff. This is what is called a Leaky Gut, and it’s at the root of many disease processes today, including autoimmune diseases. Many factors influence the integrity of your screen, or gut lining (excessive carbohydrates, sugar, stress, alcohol, antibiotic use, oral contraceptives, etc.) but I want to share with you specifically these 7 food additives that research has proved cause leaky gut and will absolutely contribute to autoimmune disease.

Some of these additives we may be more familiar with (sugar, salt, gluten) while others you may have never heard of. And this isn’t an all-inclusive list. If food companies figure out that you won’t buy a produce with a certain ingredient listed, then often they simply change the name of it. Or, in the extreme, when Monsanto (the most hated company in the world) found their name was too hard on their sales, they simply sold the entire company. Their horrible products and practices are still available however.

The point of all this isn’t to go looking on your food labels for “Sugar-Free” or “Gluten-Free” (after all diet soda is both sugar free and gluten free.) The point is TO EAT REAL FOOD. The food additive business is a multi-billion dollar industry, it’s not planning on slowing down anytime soon. You can choose not to buy processed foods! You are responsible for your health.You decide what you put in your mouth and your children’s mouths and bodies!

If this is an area of your life that you struggle in, call us today to set a time for a nutrition evaluation. We will sit down with you, perform some tests and get a plan together to improve your nutrition and your health. Call us today at 479-443-0800.